Beijinger Zhang Haoran visited Jeju Island of South Korea in May and Bali Island of Indonesia in August and now he is planning for the upcoming Chinese New Year holiday in early February.

He is tempted by Acropolis in Athens and the Aegean Sea as well as the splendid white architecture in Santorini in Greece, but also the lunar-like landscapes in Kapadokya and balloon trips over the Capadoccian valley in Turkey.

"It's hard to make a decision. I may choose one this time and the other later next year," he adds.

Zhang is a part of the rapidly soaring group of Chinese who are traveling abroad more frequently and independently. 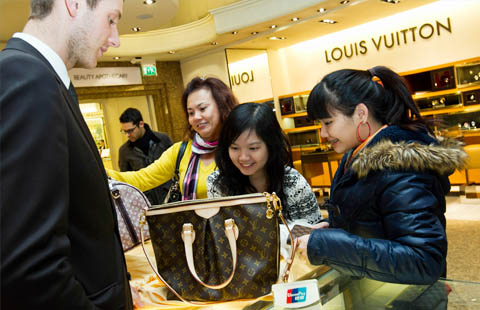 Since the turn of the century, there has been over an eightfold increase in the number of overseas trips made by Chinese travelers from 10 million who traveled to other countries in 2000.

In 2012, China became the top tourist source market in the world and the outbound Chinese travelers have grown at double-digit percentage rates ever since, according to the United Nations World Tourism Organization.

China's outbound tourists reached 107 million in 2014 and the number is expected to cross 120 million in 2015, up 16 percent over the previous year, according to the China Tourism Academy, a research institution under the China National Tourism Administration.

Still, according to a Bank of America Merrill Lynch forecast, outbound Chinese travelers could number around 174 million by 2019, spending about $264 billion annually. That's roughly equivalent to the GDP of a developed country like Singapore.

Chinese overseas travelers make up a sizable group of consumers, acclaimed as the world's largest, most favorable spenders. Chinese spent $164.8 billion overseas in 2014－a fourfold increase over 2008, and about 88 percent was on shopping, reports the China Tourism Academy. 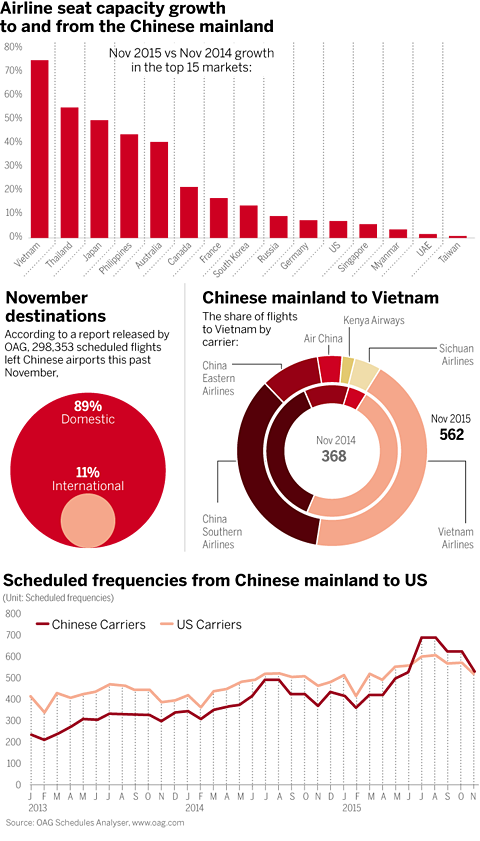 About four million Chinese arrived in Thailand in the first six months of 2015, a 110 percent increase over the same period in 2014, the country's tourism authority's data show. Spending surged 140 percent to $53.5 million.

But the biggest spending surprise came from Australia, where Chinese spent $5.6 billion in the 12 months to September 2015. The number is so huge that it even exceeds the spending by the British, Americans and Canadians combined.

VisitBritain, the official tourism board of the United Kingdom, expects Chinese travelers to be spending more than $1.47 billion a year in the country by 2020.

A Hurun/International Luxury Travel Market Asia report released in May 2015 says half of all super-rich travelers flew business class in 2014, compared to one-third the previous year.

"Itineraries that offer rich, exotic experiences are now popular with super-rich travelers, such as our Amazon River cruise or an expedition to a Kenyan national park."

Utour's publicity manager Li Mengran adds that tours to the south and north poles led by scientists and accompanied by professional photographers are also best-sellers.

South Korea and Japan lead the way in terms of available capacity, with Vietnam the fastest-growing market.

Flights to and from countries such as Afghanistan, Belarus, Czech Republic and Fiji were launched in 2015, while capacity on flights to countries like Iraq, Iran, Pakistan and Turkmenistan grew in excess of 20 percent in the first 11 months.

"The major reason for the growth lies in the policy changes that began in 1997 to allow Chinese to travel abroad at their own expenses, which unleashed a high demand for overseas travel," says Jiang Yiyi, director of the International Tourism Development Institute.

"Since then, increased disposable incomes, extended national holidays, relaxed visa restrictions for Chinese travelers and the rising value of the renminbi (China's currency) have all contributed to the boom."

The starting point of Chinese outbound tourism is July 1, 1997, when China National Tourism Administration (CNTA) and the Ministry of Public Security jointly signed an agreement on measures concerning the administration of outbound travel of Chinese citizens at their own expenses. Since the reform and opening-up policy in 1978, China dramatically increased the number of private passports. In fact, before the policy, generally Chinese travelers needed official reasons to leave the country.

The two following decades showed a continuous growth of private passport holders due to an increase in outbound visits to friends and relatives, as well as a growth of young Chinese studying abroad from the late 1980s. The 1990s has seen more Chinese going abroad at their own expense.

Today the procedures to acquire passports and other pass certificates are further simplified and more than two thirds of the private passport holders go abroad for tours.

On the other hand, China has swelling ranks of upper middle class and wealthy families, defined in the report by Boston Consulting Group (BCG) and AliResearch with a monthly disposable income over 12,500 yuan ($1,928). This group has seen their share in China expanding from 7 to 17 percent in the past five years and will continue to grow to 30 percent, or 100 million households, by 2020, the report said.

Some have compared the current trend to when Japanese tourists began going abroad three decades ago. From the mid-1980s through to the 1990s, the number of Japanese heading overseas swelled from four million to 16 million, while at the same time the nation's per capita GDP rose from $10,000 to $35,000.

"Before (the 1980s), Japanese tourists liked to stay onshore for vacations. But as they became richer all of a sudden they started to travel more. The same thing is happening in China, but at a much steeper rate," says Daniel Wilson, an economist at ANZ.

In addition, about 50 countries and regions have waived visas or relaxed requirements for Chinese.

And the United States, South Korea and Japan extended the validity of multiple-entry visas for Chinese in 2015. Countries like Australia and the United Kingdom are expected to follow in 2016. Avid travelers have been among the biggest beneficiaries of this technological revolution — they can now book flights and hotels in an instant, use "digital wallets" to buy souvenirs, post reviews on the fly, and download apps that offer detailed maps and guides of far-flung places, all in their native language.

"Technological advances have been key, as the Internet has reduced travel costs and made exotic destinations more viable (for Chinese tourists)," says Zhu Zhengyu, an analyst at Analysys International. "It has also led to more Chinese traveling independently rather than in groups."

The Chinese International Travel Monitor, compiled by online booking agency hotel.com, says at least 50 percent of tourists arranged a holiday through a smart phone app in 2015, up 17 percent year-on-year.

In 2014, Ctrip teamed up with insurance company Ping An to offer "smog insurance" for people who choose to holiday in Chinese cities regularly affected by poor air quality. Yet most prefer overseas destinations.

Zhao Lanlan, who lives in Beijing, traveled to the United States twice in 2015. "I spent one and a half months on the east coast and a month in Texas," the 58-year-old says. "I can't stand the smog. In winter, the smog gets worse, and it doesn't help hiding at home."

Going to US is easier now thanks to the relaxed visa policies, she adds. "It feels great there just to go around in the sunshine under the blue sky."

China's supply-side reform, which aims to improve industrial efficiency and productivity and reduce corporate costs through tax cuts and other measures, will produce new engines for economic growth, which is good news for outbound tourism.

Efforts to ensure the orderly development of the sector will continue, as China considers tourism an integral part of social harmony. As President Xi Jinping has pointed out, tourism is seen as an important barometer of the standard of living, while outbound tourism holds a special charm for the Chinese public.

Developed economies are paying more attention to the role of inbound tourism in boosting local economies and employment. Hence, neighboring, medium-distance and long-distance destinations will continue to compete for Chinese tourists. The relaxed visa policies and improved Chinese-language services that nations have been introduced in recent years are proof of that. 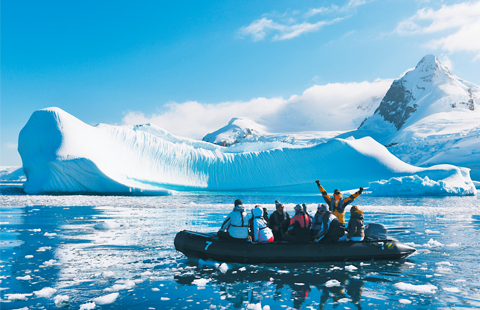 The exchange rate for China's currency, the renminbi, is likely to maintain a downward trend this year, according to multiple financial institutes, but the range won't be too wide or halt momentum in China's outbound tourism.

Chinese tourists will likely flock to countries along the routes mapped out in the Belt and Road Initiative as well as those with convenient visa policies.

Since mid-2014, the State Council has made clear that it wants to develop tourism along the Belt and Road routes, which will link Asia with the Middle East, Africa and Europe, while the country has been actively working with other countries and regions to make this a reality. China has held or plans to hold major tourism programs with South Korea, India and countries in Central and Eastern Europe.

In its 2014 report on the impact of tourism on the global economy, the World Travel and Tourism Council, headquartered in London, said visa policy restrictions were one of the main obstacles to tourism market growth. To prove the point, visits by Chinese have swelled in countries that have waived visas, introduced visas on arrival, streamlined application procedures or cut processing costs.

Chinese visitors to South Korea's Jeju Island surged by 58 percent year-on-year to nearly 2.9 million in 2014 after the authorities there started to allow 30-day visa-free stays. The flow of Chinese tourists will therefore likely grow thanks to further loosened visa policies this year. 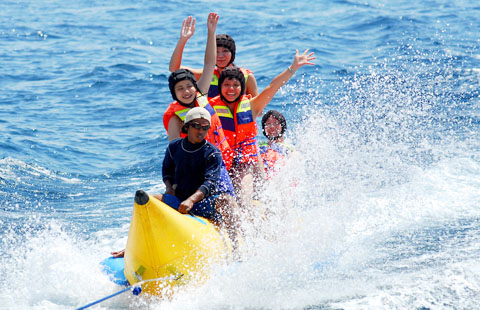 More outbound tourists are likely to emerge from China's central and western regions, especially from second- or third-tier cities and rural areas.

According to forecasts by the Ministry of Transportation, the country was to have 42 high-speed railways in operation by the end of 2015, stretching a total of 20,000 kilometers. The rapid development of high-speed rail will give people from once-isolated areas easy access to large cities, which will greatly broaden the source of outbound Chinese tourists.

Urbanization will also continue to power growth in tourism consumption. Data from the National Bureau of Statistics suggested the urbanization rate would reach 58 percent in 2015. Mid-sized and small cities and rural areas are already warming to the outbound tourism market.

Meanwhile, retail consumption will likely flow back to China in 2016. Cross-border e-commerce businesses have enjoyed booming growth thanks in part to the development of free trade zones and favorable policies, which will be further stepped up in the new year.

Chinese are expected to buy more in their homeland as more foreign goods become available, while there is also room to cut prices and improve after-sales services. The author is director of the China Tourism Academy's International Tourism Development Institute.

Industry professionals share their views on why there has been such an explosion in outbound travel in China, will the boom continue, and is the world prepared to welcome more Chinese travelers?

The page is best viewed using IE version 8 or above, and other browers including chrome and baidu.

Copyright 1995 - . All rights reserved. The content (including but not limited to text, photo, multimedia information, etc) published in this site belongs to China Daily Information Co (CDIC). Without written authorization from CDIC, such content shall not be republished or used in any form.